As some of you know, I am in the process of writing a book. I have been for years and while I love it and can’t wait to be finished, sometimes I feel really embarrassed by it.

I know why. The subje 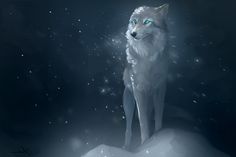 ct matter at face value is seemingly childish and the majority of the adults in my life wouldn’t read a story like mine. I feel my cheeks flush when asked about it and so generally people don’t know that I am writing, and seriously at that.

Let me give you a synopsis so perhaps you can understand:

Silver White, half werewolf half Light Wolf, leaves home to avenge his father. Inexperienced and naive, he finds himself in the very clutches of the immortal he tried to kill and is soon sent on a mission that should spell his death. Along the way, Silver discovers who he is and the destiny that his creator has made for him. In this world of shapeshifters
, elves, werewolves, dragons and more, experience a full range of human experience through inhuman characters following the age-old archetype of a “good versus evil” hero’s quest.

That. Was. So. Difficult to write… I have such a hard time narrowing what I want to say about my story I generally leave it at: oh… it’s a medieval fantasy… But that isn’t what it is. Not really. It’s a story about good and evil, about coming to faith, about learning that you can’t do things on your own, you need help, about failure, about loss, about pain… about love. And I love it. Like really love it. So, maybe that’s another reason I have a hard time explaining it to others… Most people react with an “Oh… that’s nice.” or something similar to a story that has my heart.

I know it isn’t something that many of you go for, for many reasons, but it is me, it is a story that has stayed with me since late elementary school with themes that I hope can provide help and comfort to many. Yes, there are werewolves and dragons and strange creatures that even I have never seen in another book quite like I have created them. I’m not sure it is a story I would write now, but it is a story that I am writing and I couldn’t ask for a better cast to be working with. I feel scared for them, my characters, because I hope to do them justice and because I want them to be welcomed, not scorned, by readers. I want people to fall in love with this world as I have, even though it is not a normal story, a safe topic, or even just what anyone would expect. My characters are not perfect… they make mistakes, they willfully do wrong and wrong is willfully done to them. It is not a children’s book by any estimation despite the fantasy.